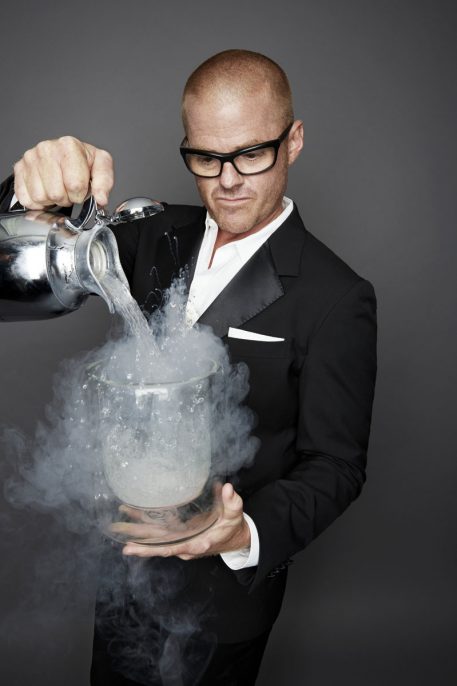 “Question everything . . . If you don’t question things, there’s no knowledge, no learning, no creativity, no freedom of choice, no imagination”

Heston Blumenthal is chef-patron of The Fat Duck in Bray, a three Michelin-starred restaurant known for its whimsical, scientific and creative style of cookery and famed for being named World’s Best Restaurant more than once.

At the age of 16, Heston travelled to France with his family for the first time and became fascinated with the world of food. He spent the next decade learning the basics of French cuisine from books and working as everything from a photocopier salesman to a debt collector to fund annual research trips to France.

Heston opened The Fat Duck in 1995 with no financial backing. On the second day of opening the oven exploded, and Heston spent the rest of service with a bag of frozen peas on his head. Gradually, the restaurant eventually moved from serving simple French bistro food to the innovative, rule-breaking, multi-sensory tasting menu it serves today. Perhaps what is most extraordinary about the success of The Fat Duck is that Heston is entirely self-taught, save for three weeks spent in a few professional kitchens.

Loved by millions, Heston’s work continues to explore creativity, imagination and the importance of being human.

Our work with Heston Blumenthal

When Heston asked us to join him on his new journey to exploring the wonderful world that is uniquely human, we put on our wellies (as he likes to say) and jumped right in.